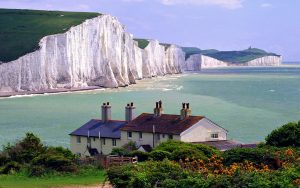 (The White Cliffs Of Dover)

Kent is a county in South East England and one of the home counties. It borders Greater London to the north west, Surrey to the west and East Sussex to the south west. The county also shares borders with Essex along the estuary of the River Thames, and with the French department of Pas-de-Calais along the English Channel. The county town is Maidstone.

Canterbury Cathedral in Kent has been the seat of the Archbishop of Canterbury, leader of the Church of England, since the conversion of England to Christianity by Saint Augustine began in the 6th century. Rochester Cathedral is also located in Kent, in Medway. It is the 2nd oldest Cathedral in England, with Canterbury Cathedral being the oldest. Between London and the Strait of Dover, which separates it from mainland Europe, Kent has seen both diplomacy and conflict, ranging from the Leeds Castle peace talks of 1978 and 2004 to the Battle of Britain in World War II.

England relied on the county’s ports to provide warships through much of its history; the Cinque Ports in the 12th–14th centuries and Chatham Dockyard in the 16th–20th centuries were of particular importance. France can be seen clearly in fine weather from Folkestone and the White Cliffs of Dover. Hills in the form of the North Downs and the Greensand Ridge span the length of the county and in the series of valleys in between and to the south are most of the county’s 26 castles.

Why choose us for your taxi to or from Kent?