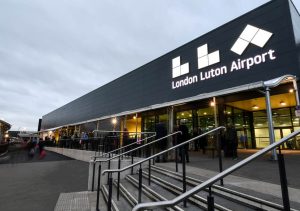 •London Luton Airport officially opened on July 16, 1938. The airport was owned by borough of Luton and was considered the northern terminal of London.

•In 1952, the use of civil airports was restored and a new control tower was opened.

•Over the next decade, “packages” for vacations were developed, which became very popular, allowing many to travel abroad for the first time.

•In 1978, the commission began preparing Luton for the future in order to increase the number of passengers to 5 million per year.

•In 1985, the Prince of Wales opened a new international terminal building.

•In 1987, Luton International Airport became a limited liability company. Only the borough Luton council as the sole shareholder.

•The airport was renamed to London Luton Airport in 1990 to become part of the London airport network.

•Passenger numbers have decreased since Ryanair transferred many businesses to Stansted in 1991.

•In 1991, a new management team was formed to open airports. Over the next five years, £ 30 million was invested to improve infrastructure and facilities. Luton was the fastest growing airport in the UK.

•A new private public partnership, signed in 1998, means that the airport is owned by the Luton borough council but successfully privatized.

•The upgraded terminal was officially opened in November 1999 by the Queen and the Duke of Edinburgh.

•At the end of 1999, Railtrack expanded access to the center of London by opening £ 23 million Luton Parkway station in London.

•In 2001, the number of passengers continued to increase as 6.3 million passengers crossed the airport, and the demand for travel packages increased at the seventh largest airport in the UK.

TERMINALS
Luton Airport has a two-story passenger terminal building that has been expanded and redesigned several times. On the ground floor, there is a main hall with 62 check-in counters (1-62), a separate security room, several shops, a reception desk and an arrival hall. After the security room, the staircase leads to the departures lounge on the upper floor, with several more shops, restaurants and all 28 departure gates and can reach two side columns (1-19 and 20-28). Besides branches of burger king, Starbucks, Boots and other airport lounges are located in the terminal.

At LLA, they want to make our airport journey as quick and hassle-free as possible. They know that queuing and being subjected to checks is the last thing we want to be doing, especially if we’re off on holiday. That’s why they’ve invested in a new Security area with the very latest technology.

But we can help too, by being prepared. Check out their top tips, and be Security Smart.

What we can do before we get to the airport

1. Think before we pack

Everyone knows that there are strict rules about what we can put in our hold and hand luggage. But it’s worth double checking what’s not allowed and taking extra care when we pack, to avoid the delays that happen if we get it wrong.

In the main, it’s all just common sense.

We can take your essential liquids (including creams, pastes, lotions and gels) onto the flight, if the capacity of the containers is no more than 100ml. Put them all in a resealable, clear plastic bag (approximately 20cm x 20cm) and put the bag in the tray at Security.

?We’re allowed one plastic bag per passenger and bags are available free of charge at the Liquid Preparation Desk prior to Security.

Remember that we can always buy drinks for the flight once we’re through Security.

What we can do when going through Security

Get through to securty quickly thanks to their electronic boarding pass gates. Simply present the barcode on your boarding pass face down on the scanner, whether printed or on our smart phone and the gate will automatically open for us

?A manual gate is always available if we require assistance.

4. Get into pole position

They have 14 Security lanes, with six positions per lane. So when it’s our turn to join a queue, look out for the shortest and head straight there. It’s not a race, but we can still be a winner.

It’s our task to put our belongings into trays and push them forwards when we’re ready. This includes coats and jackets. We’ll need to remove all large electrical items from our bag and place them separately in a tray. Do the same for our compliant liquids bag. Be prepared to remove our shoes if asked to do so. we’re in control, so keep things moving.

Put little items (watches, jewellery, money, wallets, phones, belts, passport, etc.) in our Hand Baggage or coat pockets. That way, we’ll only have to grab a couple of things once we’re through. Genius.

7. Help them and help ourselves

If a member of LLA staff asks us do something, it’ll be for a very good reason. If we’re selected for a scan, for example, it’s not personal, it’s just part of our essential safety measures. So we need to be prepared for our bit.

8. Need to Hold onto our hats

With all the distractions, it can be easy to forget something we’ve put into a tray. Take a moment to check that everything we put in matches what we take back. If we find we’ve forgotten something while we’re still at the Airport, we can always return to Security.